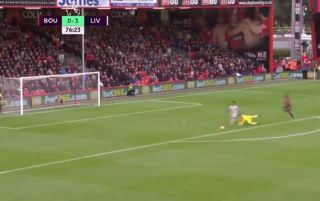 Mohamed Salah scored his second fantastic solo goal of the game against Bournemouth this afternoon as he sealed his hat-trick with a strike in the last 10 minutes at the Vitality Stadium.

Salah had already scored one belter of a solo strike earlier in the match, and he bagged his hat-trick with a similar goal late in the second half.

The Egyptian beat defender Steve Cook to a loose ball before rounding Asmir Begovic, faking the Bosnian out again just seconds later before slotting the ball home from six yards.

It was Salah’s 10th goal of the season, something that now means he’s joint with Pierre-Emerick Aubameyang in the race for the Premier League Golden Boot this season.

Here’s a clip of Salah’s hat-trick goal this afternoon. Superb composure from the former Chelsea star!

Salah is Pure class.. Hazard should be Watching this goal.? Hattrick ???#BOULIV pic.twitter.com/y6bcim8ach