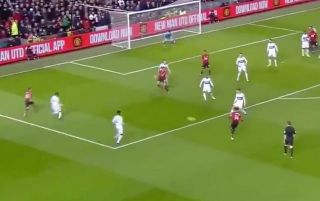 Man Utd were in rampant scoring form against Fulham as Romelu Lukaku gave them a three-goal advantage heading into the half-time break.

Ashley Young and Juan Mata had given them a 2-0 lead after just 28 minutes, but Jose Mourinho’s side weren’t done there against a hapless Fulham.

As seen in the video below, they produced an excellent routine from a corner which they’ve clearly worked on in training, as Mata and Jesse Lingard were heavily involved in carving the Fulham defence apart.

Lukaku was then given the simple task of tapping home from close range to put United in a dominant position to secure three crucial points as they look to close the gap on their rivals in the hunt for a top-four finish in the Premier League this season.

As for Fulham, their misery continues as they look set to remain rooted to the bottom of the table after another heavy defeat unless they can launch an unlikely comeback at Old Trafford.