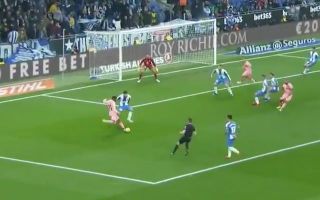 Barcelona produced quite the show in their encounter against Espanyol on Saturday night, with Lionel Messi at the heart of their brilliant play.

Not content with breaking the deadlock with a stunning free-kick, Messi then turned provider for Ousmane Dembele as the Catalan giants doubled their lead.

As seen in the video below, it was simply incredible play from the Argentine icon, as he showcased some amazing close control to wriggle his way out of trouble when surrounded by Espanyol players.

Further, he then had the composure and presence of mind to pick out Dembele in space with a reverse pass out on the left flank, and the Frenchman proceeded to cut in onto his right foot and curl in a brilliant goal.

Barcelona were rampant after that too as they threatened to put themselves out of sight before half-time, as Espanyol undoubtedly struggled to cope with their attacking threat, particularly on the counter-attack as they flooded forward with pace and intent.

Unsurprisingly, Messi continues to be at the heart of such dazzling play from the reigning Spanish champions…

Barcelona are turning on the style against Espanyol, they lead 2-0! pic.twitter.com/WRzURxUrix

Messi in absolute god mode and what a finish from dembele pic.twitter.com/ARXnCoVi7z