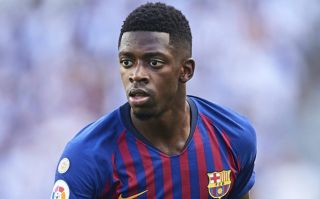 After playing a starring role in Barcelona’s win over Espanyol on Saturday night, Ousmane Dembele has reportedly turned up late for training again.

As seen in the video below, the 21-year-old bagged a stunning goal in Barca’s 4-0 win over their rivals, as he made it eight goals and five assists in just 19 appearances so far this season.

That would suggest that things are going well on the pitch, but unfortunately for Barcelona, their frustration continues off it as Sport claim that the Frenchman turned up two hours late for training on Sunday.

It’s not the first time that it’s happened, as noted by Eurosport last month, and it will undoubtedly be a source of major frustration for the Catalan giants that the talented youngster isn’t showing the right attitude all the time.

If accurate, there really is no excuse for it as ultimately Dembele has an incredible opportunity to play for one of the biggest clubs in the world and is clearly being given the chance to shine by coach Ernesto Valverde.

While he’s responding with decisive performances on the pitch, it seems as though he’s struggling to adopt that same mentality off the pitch, with Sport suggesting that there was no genuine excuse put forward to defend himself.

As noted by The Express, both Arsenal and Liverpool continue to be linked with a swoop for the French starlet.

Although he’s made his case to establish himself as a key figure in Barcelona’s plans, he surely can’t afford to continue to frustrate Barcelona with a lack of professionalism as it could be enough for them to consider a sale if his attitude and approach isn’t in keeping with the club’s expectations.