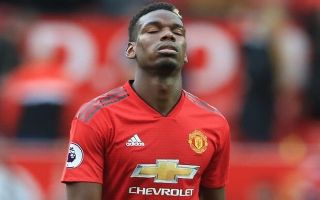 Manchester United midfielder Paul Pogba was surrounded by security in order to avoid being photographed when he went to United’s Christmas party in Manchester last night.

According to a report from Mirror Football, the World Cup winner had to be taken into the Neighbourhood Bar and Restaurant through a back entrance alongside security to avoid the star being photographed.

The Christmas party was held just hours after United’s win against Fulham, the Red Devils’ 4-1 victory was their biggest win of the season and fans will be wondering if this will be the turning point in what has been a disappointing season.

Check out a photo of Pogba surrounded by his security below:

According to the Mirror, Pogba was the only United player to be covered in coats to disguise his appearance.

Pogba wasn’t the only United star to be taken through to the venue via the back entrance; Jesse Lingard, Marcus Rashford and Ashley Young were ushered through the back door to avoid attracting attention.

Pogba has failed to live up to expectations since re-joining United two years ago, the midfielder is often too inconsistent and the former Juventus star has been unable to lead the club to Premier League glory during his second spell at the club so far.

Much of Pogba’s second stint at United has been overcome with media attention on the 25-year-old’s strenuous relationship with United boss Jose Mourinho.