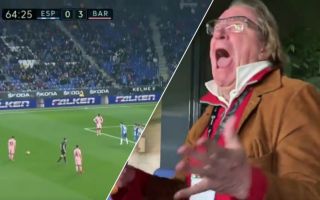 The Blaugrana overcame locals rivals Espanyol 4-0 at the RCDE Stadium, with goals form Messi, Luis Suarez and Ousmane Dembele proving to be the difference between the two sides.

Both of Messi’s strikes came from free kicks, with his second being one that any player in history would be proud to say they scored.

It was so good in fact, Hudson almost spilt the entirety of his drink watching the ball hit the back of the net, something we can probably guess has happened before given how much of a fan the commentator is of the forward!

You can catch Hudson’s crazily brilliant reaction below. Something tells us that isn’t the first time he’s done something like this after a Messi goal!