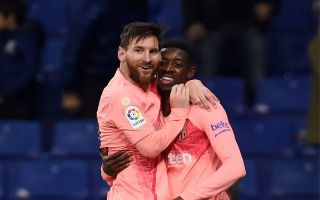 Barcelona produced a majestic performance in their 4-0 win over Espanyol on Saturday night, and Lionel Messi was full of praise for Ousmane Dembele.

The 31-year-old produced two moments of sheer magic with two spectacular free-kicks, while he also had time to provide a stunning assist for his teammate, as seen in the link below.

The win moved Barcelona three points clear at the top of the La Liga table after what was arguably one of their best performances of the season thus far, as Espanyol simply had no answer to keep their attack quiet as they could have scored plenty more.

In another example of his exceptional humility and desire to see others around him also play a key role, Messi spoke about Dembele after the game and insisted that the Catalan giants need the Frenchman.

“We are happy for Dembélé. Today he has scored again, he’s happy and will do very well. We need Dembélé,” he said after the game, as quoted by Mundo Deportivo.

The 21-year-old is quietly having a decisive impact for the reigning Spanish champions, scoring eight goals and providing five assists in 19 appearances so far this season.

As noted by Eurosport, he has had his problems as well with question marks being raised over his professionalism, but ultimately with Messi in his corner and praising him, it will surely be enough of an incentive to get his head down and continue to play a vital role for Barcelona this season.

If coach Ernesto Valverde can exploit teams with his attacking trident in the same way that they ripped Espanyol apart on Saturday night, it’s difficult to see any side managing to contain Messi, Dembele and Luis Suarez in that kind of form.