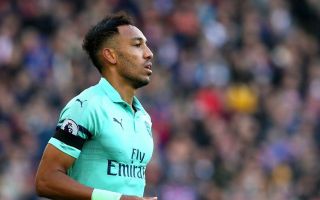 Arsenal are reportedly ready to enter the running for the transfer of Inter Milan striker Mauro Icardi as a replacement for Pierre-Emerick Aubameyang.

The £85million-rated Argentina international would seemingly be the Gunners’ first choice to replace their top scorer Aubameyang as it’s suggested by Don Balon that the Gabon international could leave the club after recent controversy.

The former Borussia Dortmund striker was one of the players involved in inhaling ‘hippy crack’ – along with Mesut Ozil, Alexandre Lacazette and Matteo Guendouzi – in a report from the Sun.

It may now be that this will end up costing Aubameyang at the Emirates Stadium, despite his superb form on the pitch since he joined the club in January.

Icardi would undoubtedly be a fine replacement for the 29-year-old, though this is far from an ideal situation for Arsenal.

Unai Emery inherited a tough job when he replaced Arsene Wenger this summer, so could do without this kind of drama.

Gunners fans, meanwhile, will have no doubt taken well to Aubameyang after his fast start in England, so won’t want to see him leave so quickly, even if Icardi would make a fine signing to fill that centre-forward spot.