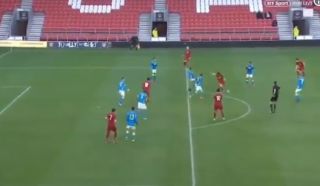 Liverpool wonderkid Bobby Duncan has continued his immense form at youth level for the Reds with this sublime solo strike against Napoli Under-19s.

The senior teams meet in the Champions League tonight and LFC fans will hope this kind of thing from Duncan is a sign of more to come from the club.

Watch the Duncan goal video below as the teenager makes space for himself brilliantly inside the box before firing in an unstoppable low effort into the far corner.

It was an emphatic performance from Liverpool in general, with this another memorable strike in a 5-0 victory:

The first touch is sublime but the finish is even better!

A 5-0 win against Napoli secured #LFCU19s place in the last 16 of the UEFA Youth League ? pic.twitter.com/cnOwwwNaB2

On top of that, these are Duncan’s stats for the Reds in the league this season – truly a special talent…

Bobby Duncan for Liverpool U18s in the PL U18:

Loads of Liverpool fans are all saying the same thing about Bobby Duncan as he completes late Fiorentina transfer Sep 2 2019, 20:07
Liverpool FC