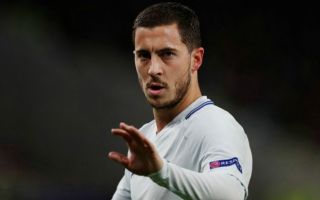 Real Madrid are reportedly ready to offer one of three players to Chelsea for the transfer of Eden Hazard.

The trio in question are Isco, Marco Asensio and Croatian midfielder Mateo Kovacic, who is currently on loan with the Blues for the season.

MORE: Chelsea star’s agent reveals transfer talks with Manchester United and Liverpool and others prior to Stamford Bridge move

This is according to Don Balon, who state Chelsea are in an increasingly tough situation regarding the future of Hazard, who will be out of contract at Stamford Bridge at the end of next season.

The Belgium international is one of the finest players in the world and would be a fine addition for Real at the moment as they look in need of a major revamp after bizarrely selling Cristiano Ronaldo to Juventus in the summer.

The Portuguese superstar has been a big miss for Madrid, with players like Gareth Bale and Asensio not stepping up in his absence.

It is therefore unsurprising to see Don Balon claim Asensio could be one of the players Los Blancos are ready to get rid of to help them land Hazard.

It remains to be seen which of those players would be a priority for CFC, with Kovacic already at the club on loan and performing well, though a like-for-like replacement for Hazard would surely be more useful.

Asensio and Isco could therefore be better options for the west Londoners, though neither are really in Hazard’s league.