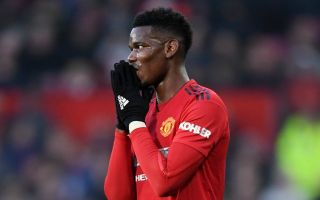 Man Utd reportedly have no interest in allowing Paul Pogba to leave Old Trafford in January, and will look to fend off any interest in the World Cup winner.

Speculation has seemingly been rife over the Frenchman’s future at the club ever since he publicly conceded that he wasn’t entirely happy at United, as per The Guardian.

The 25-year-old has struggled to find consistency in his performances this season, scoring five goals and providing four assists in 19 appearances.

Further, he’s even been dropped to the bench in recent clashes with Young Boys in the Champions League, and against Arsenal and Fulham in the Premier League.

Nevertheless, as noted by ESPN, Man Utd have no intention of selling Pogba in January despite interest from former club Juventus, and so it would appear as though he will still be a United player in the second half of the campaign.

That seems like the most sensible strategy, given that it could be particularly difficult for the Red Devils to identify and acquire a capable signing to fill the void left behind by Pogba halfway through the season.

With that in mind, they’re certainly right to keep him at least until the summer, and then perhaps the situation will be revisited if an exit remains a threat.

Juventus added Cristiano Ronaldo to their squad this past summer as they go in search of Champions League glory as well as continuing their domestic dominance.

Pogba was a fundamental part of that success during his time in Turin, emerging as one of the top midfielders in Europe alongside the likes of Andrea Pirlo and Arturo Vidal.

Perhaps a return to Turin will bring that quality back out of him on a regular basis, while Juve are certainly primed to offer him a chance of winning major honours in the coming years. It’s questionable as to whether United can do the same given their struggles under Jose Mourinho so far this season.