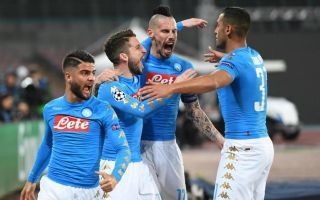 Napoli face a crucial encounter with Liverpool in the Champions League on Tuesday night, and Dries Mertens has questioned the aura surrounding Anfield.

The Italian giants currently sit top of Group C, but defeat to Liverpool and a Paris Saint-Germain win over Red Star Belgrade could yet see them fail to qualify for the knockout stage.

In turn, they will be desperate to produce a performance on Merseyside, and Mertens has questioned the aura and intimidating factor behind playing at Anfield, particularly on a European night.

“My strongest memory is that they have a sign saying ‘This is Anfield’ and everyone was talking about it, so I was thinking it’s very big, you know,” he noted, as per The Times. “I came through the tunnel and I asked, ‘Where is the thing?’ and they said you missed it and I hadn’t noticed it. So, in the second half, I’m looking at this small thing and asking, ‘Is this so special?’ ”

Meanwhile, he also recalled a previous trip to Anfield in the Europa League and took another cheeky dig at the atmosphere. However, clearly in more of a jovial manner, he is fully aware of what lies in wait this time round, especially with what is at stake.

“They had a special price for children, so maybe not,” he added about atmosphere. “Football in Italy is crazy and the people are very crazy too so I think we are used to it. For me, it will push me to a different level, these are the nights we want to play.”

Time will tell if Napoli can come away with a desired result, or if Liverpool are able to produce another memorable European night for their supporters to get them behind the team.

Mertens will certainly be crucial for the visitors given his goalscoring influence, but after these comments, he might not get a particularly warm welcome from the home faithful as Liverpool look to avenge their defeat in Naples earlier in the group stage.

Blow for Chelsea as transfer target could snub exit and pen contract renewal instead May 18 2020, 20:27
Chelsea FC