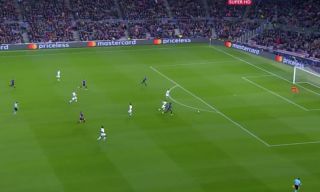 Ousmane Dembele scored an absolutely sensational goal for Barcelona this evening to give his side the lead against Spurs at the Nou Camp in the Champions League.

The Frenchman has been in fine form for the Blaugrana as of late, and he continued that tonight as he put Spurs to the sword in the 7th minute of their Champions League clash.

The goal came after a sloppy touch from Kyle Walker-Peters was closed down by Dembele, who nabbed the ball off the defender before ripping him for pace moments later.

The winger than sold Harry Winks with a brilliant dummy before slotting home past Hugo Lloris, a beautiful goal all round from the youngster!

It's a nightmare start for Spurs…

From a free-kick in an attacking area to conceding a goal in seconds ?