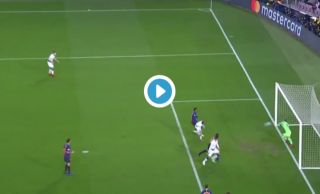 Spurs were just inches away from bagging a much-needed equaliser against Barcelona this evening, however Lucas Moura was denied by a brilliant stop from Jasper Cillessen in the Barca goal.

Needing to match Inter Milan’s result this evening, Spurs found themsevles 1-0 down vs Barca, and with Inter drawing against PSV, the north London sided need a goal to go through to the Champions League knockout stages.

They had a glorious chance to do so, as Lucas Moura met a cross from the right hand side, however the Brazilian winger was denied by Cillessen on the line, with the Dutchman pulling out a glorious stop to preserve his side’s lead.

What a brilliant save By CILLESSEN!
Trust us, he is our 2nd goal keeper…. ????#BarçaSpurs pic.twitter.com/7Z9DCRW6fN