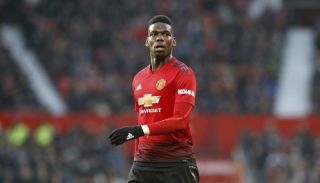 Juventus are reportedly plotting an €80m+ swoop on Man Utd for Paul Pogba, and will use their Champions League revenue to fund the move.

Speculation has been rife over the Frenchman’s future at Old Trafford all season, and given his recent spell on the bench for games against Young Boys, Arsenal and Fulham, The Guardian suggest it could spark talks between him and Jose Mourinho if it continues.

It comes amid a disappointing season overall for the Red Devils given that they’re still in sixth place in the Premier League table and eight points adrift of the top four.

They’ll have the chance to leapfrog Juventus into top spot in Group H in the Champions League on Wednesday night though, but the Turin giants could emerge as a serious threat to them in a different manner.

According to Calciomercato, via the paper edition of Tuttosport, Juventus are reportedly planning to use the revenue generated from qualifying for the knockout stage of the Champions League and putting that towards an €80m bid for Pogba.

Such a deal would undoubtedly cost significantly more when wages and other possible fees are taken into consideration, and so it would be back-to-back years in which the Italian champions have made marquee signings following the arrival of Cristiano Ronaldo from Real Madrid this past summer.

Pogba of course enjoyed a successful stint in Turin previously between 2012 and 2016, making 178 appearances for the club while winning four Serie A titles and two Coppa Italia trophies while emerging as one of the top midfielders in Europe.

The World Cup winner seemingly sparked all this uncertainty over his future at United himself when admitting that he wasn’t entirely happy back in August, as per the Guardian, and so it remains to be seen if United are willing to let him go if the touted €80m bid from Juventus arrives.

Given he’s still their most talented midfielder on paper, Mourinho will surely be eager to secure a capable replacement first before even entertaining the thought of losing the French international.