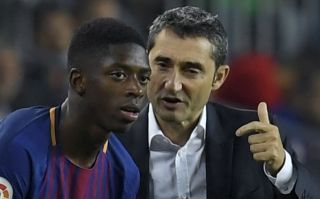 Barcelona ace Ousmane Dembele put in another decisive display in their draw with Tottenham on Tuesday night, but Ernesto Valverde heeded caution after the game.

On the pitch, the 21-year-old is having the impact that the Catalan giants had hoped for as he’s now scored nine goals and provided five assists in 20 appearances so far this season.

However, while he now appears to be settling into the team well, question marks have been raised over his professionalism and attitude with AS noting that he faces a huge fine after arriving late for training twice already this season.

With that in mind, Valverde was perhaps a little cautious in suggesting that the case is now closed in terms of Dembele’s off-the-pitch distractions, as he seemingly had a little dig at the Frenchman over his training troubles this year.

“He scored a goal with a coldblooded finish, although he did end the game feeling a bit tired. We are a team and we all move in the same direction, we want to win, and we’ll solve internal affairs in the dressing room,” he is quoted as saying by Marca.

“I do not know [if the case is closed], we have training tomorrow.”

Time will tell if Dembele can now get himself to training on time and prove he’s got his attitude spot on, as ultimately given his talent and potential coupled with his current influence on the team, he has everything in front of him to be a success at one of the biggest clubs in the world.

Valverde has arguably showed real patience with him already to continue to include him in the side despite his issues off the pitch, but now it will be on Dembele to prove to those that matter that he’s fully committed to the cause and his teammates with Valverde’s seemingly cheeky dig having a serious undertone to it too.