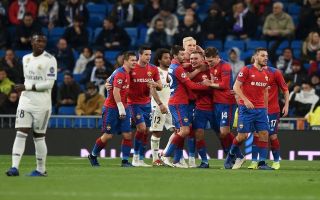 One Real Madrid superstar has been slated by fans for his performance in the first half of their Champions League clash against CSKA Moscow this evening.

Real Madrid left-back Marcelo has been criticised by Los Blancos fans for his poor performance in the first-half of Madrid’s Champions League tie against CSKA Moscow. The Russian side ended the first-half with a shock two goal lead.

CSKA’s Fyodor Chalov and Georgi Shchennikov scored in the space of only six minutes to give the Russian side a shock lead heading into the second-half.

Marcelo was deemed by fans to be at fault for both of the CSKA goals this evening and it looks like the Brazilian who was once heralded as the world’s best full-back has been exposed for his poor defending this evening.

Marcelo was also named as Madrid’s captain for the match and the 30-year-old has so far failed to lead by example and new Real Madrid manager Santiago Solari may have to consider dropping the star in the future.

The attack-minded full-back will have no chance against some of the world’s most dangerous attackers in the knockout stages if he turns in a performance like he has today.

Check out some fan reaction to the Brazilian’s poor first-half performance:

Marcelo can't defend. Especially when he's in his "cba" mood.

I really don't want to say this but I believe the problem this season is Marcelo ?

People who still claim Marcelo is the best left-back in the world clearly haven't watched him this season.

Marcelo has become a liability ? his defending is awful! #HalaMadrid

Marcelo back and the defense in shambles ?

Both of he goals came off of marcelo’s side, how bad is he at defending man.

Marcelo was culprit in both of the goals. He was like a tree, WTF he was doing?

Shocking defending from Marcelo..at fault for both goals

Marcelo is a liability in defense.