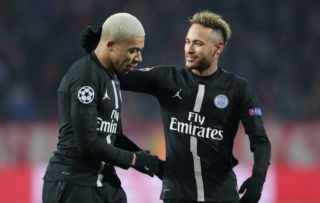 Manchester City have reportedly taken big strides towards signing PSG and Brazil winger Neymar, after it was noted that the club have made ‘first contact’ with the player’s agent regarding a move to the Etihad.

Neymar only moved to Paris in the summer of 2017, however it seems like the former Barcelona man has already grown tired of life with the French giants.

Don Balon are noting that the Citizens have made ‘first contact’ with the Brazilian’s ‘environment’ regarding a move to the club, and that Neymar wants to become the highest paid player in the Premier League if he’s to sign for Pep Guardiola’s side.

The report also states that Neymar’s price tag sits at a whopping £224M (€250M), however paying this shouldn’t be a problem for City given the financial backing they have.

Signing Neymar would be a huge move from City, as it would cement their place as one of the biggest teams in the world if they were to have the Brazilian on their side.

The 26-year-old is one of the best players on the planet, and his signing would give Man City’s chances of winning the Champions League a huge boost.

City’s squad is already one of the best in the world, and adding Neymar to that would only see them increase the overall quality and depth of their squad for the foreseeable future.

Only time will tell us if City actually do end up pulling off the huge signing of Neymar, something that their Premier League rivals will certainly not want to see happen!