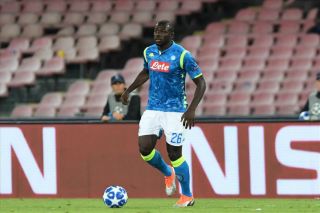 Napoli defender Kalidou Koulibaly has conceded that his side felt a bit of fear heading into their Champions League clash with Liverpool.

The Merseyside giants secured a 1-0 win at Anfield to seal their progression to the knockout stage along with Paris Saint-Germain, while Napoli will now drop down to the Europa League.

The visitors certainly had their chances, but ultimately it was Mohamed Salah’s first-half goal that settled matters to leave Carlo Ancelotti and his men disappointed.

While a trip to Anfield is never easy, Koulibaly has given a very frank interview in which he admitted that there was a ‘bit of fear’ for the Italians heading into the encounter, but it must now be used as a learning experience to avoid similar setbacks in the future.

“It was a very important game, we knew that Liverpool had to win and we had a bit of difficulty, the goal was avoidable and we could have done more to score but tonight it was difficult,” he told Sky Sport Italia, as quoted by Calciomercato.

“Today, subconsciously, there was a bit of fear against a team that is so strong and so it’s not easy. Today is only a negative step, we hope to have more positive ones.”

As seen in the video below, Koulibaly had a fascinating battle with Salah throughout the game, showcasing why the Senegal international is widely regarded as one of the top centre-halves in Europe.

However, it was Salah who ultimately got the last laugh, as Liverpool look forward to the Champions League last-16 draw next week, while Napoli will now focus on securing a return to Europe’s top table next season and seeing if they can build on their run this time round.

Given that they were in a group containing PSG and Liverpool, it was always going to be difficult for the Italian giants.