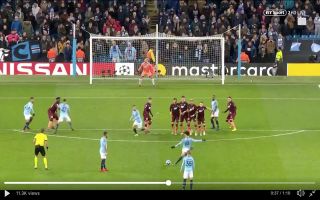 Manchester City winger Leroy Sane scored a magnificent free-kick in the first-half injury time to equalise for City against Hoffenheim this evening.

The Citizens were on the front-foot for the majority of the first-half but Pep Guardiola’s men went 1-0 down in the 16th minute of the clash after Andrej Kramaric scored a penalty that was conceded by City defender Aymeric Laporte.

City ramped up the pace after conceding and after hitting the woodwork on two occasions it looked as though City wouldn’t be able to break the deadlock… Then stepped up Sane with a wonderful free-kick.

Sane scored a sensational free-kick from around 40 yards out. The winger perfectly lifted the ball up and over the wall before the ball dipped at the perfect time to beat Oliver Baumann and fly into the top corner.

Check out Sane’s wonderful free-kick below:

"Power, precision… have some of that!" @chris_sutton73

Sane is the first German to score against a German side in the Champions League since Arsenal superstar Mesut Ozil back in 2015.