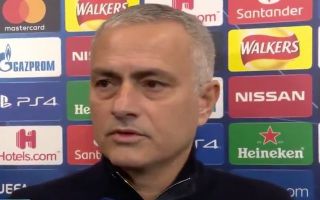 Man Utd boss Jose Mourinho delivered his verdict on his side’s performance in their defeat to Valencia, and it didn’t go down well with many supporters.

The Red Devils slipped to a 2-1 defeat in Spain, and with Juventus losing to Young Boys, they missed out on the opportunity to finish top of Group H.

Instead, they now likely face a difficult tie in the last-16, but it was Mourinho’s post-match interview with BT Sport which irked many fans, as seen below.

Initially, the Portuguese tactician tentatively joked about the result and Phil Jones’ own goal, but went on to deliver a more serious verdict by suggesting that he thought his team were too passive and lacked intensity.

Given that it’s his job to not only motivate the players to carry out his instructions but to also make it clear tactically how best to expose and defeat their opposition, that responsibility surely starts with him.

While the loss isn’t costly in the sense that Man Utd had already qualified for the knockout stage of the Champions League, the game still meant something.

Instead of giving themselves a confidence boost and a potentially ‘easier’ route in Europe, United suffered another disappointing defeat, and as seen in the tweets below, Mourinho’s post-match comments didn’t go down particularly well with many fans.

From being labelled a ‘clown’ to being questioned over his tactical decisions and coaching skills, it’s fair to say that Mourinho came in for more stick on Wednesday night.

As they now prepare to face Liverpool at Anfield on Sunday, it could get a lot worse for the Portuguese tactician if he isn’t able to inspire his side to a positive result against their bitter rivals, as a defeat will surely spark another angry backlash against the manager and players.

Yep, that’s how own goals work ?

Absolute clown. 3 seasons he’s been saying the same thing. He coaches no attacking patterns of play. We still don’t press. Our wide players make up a back 6. No matter which midfield plays, we’re still slow and pathetic

This is the manager of the club I love and support. I can’t ?

A lack of him being a good coach too. Absolutely finished at the highest level. Worst manager we’ve had post Ferguson given the money he’s spent

Every game the lack of effort is disgraceful. I don’t even look forward to watch games anymore.

The man has lost the plot. He has to go!!

Mourinho sliding slowly but happily as planned into a Lowry Suite full of cash. In a sad 5 year period #mufc ,this is undoubtedly the saddest

I’m tired of all these blabbings.

How can he joke about that display? shocking…. That wasn’t Man United on that pitch tonight