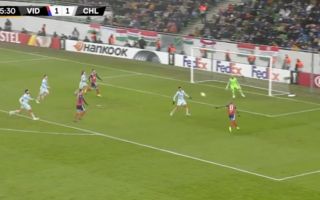 Chelsea shockingly fell behind to a superb goal from Mol Vidi in their Europa League clash against the Hungarian side this evening.

The Blues originally took the lead thanks to a fine goal from Willian, however they were immediately pegged back by their opponents just seconds later.

Maurizio Sarri’s men then found themselves 2-1 down in the second half, as Loic Nego finished off a brilliant team goal to give Mol Vidi the lead.

Although this match is meaningless for the Blues, we’re sure their fans still won’t be very happy if they go on to suffer a defeat this evening.

You can catch Nego’s strike here. Great volley from the lad to wrap up a great team move!