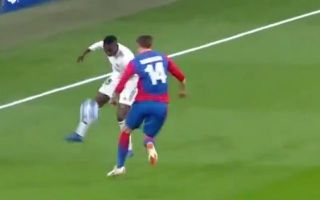 It was a night to forget for Real Madrid in the Champions League on Wednesday, but Vinicius Jr certainly impressed with this bit of skill.

Qualification for the knockout stage had already been secured but Los Blancos would have wanted to end the group stage on a high in front of their home fans.

Instead, they suffered a heavy 3-0 defeat to CSKA Moscow, albeit they still go through as group winners. Nevertheless, Santiago Solari and his players will certainly be under pressure to produce a positive response this weekend.

However, one player who seemingly didn’t allow his confidence to be knocked was Vinicius Jr, and as seen in the video below, he produced a wonderful bit of skill to suggest that he was made for the big stages.

It earned him the ‘Skill of the Day’ award from the official Champions League Twitter account, and he certainly wowed the Bernabeu faithful who let out an audible noise as the Brazilian starlet pulled off his trick.

Vinicius Jr has bagged six goals and provided five assists in 13 appearances so far this season both at senior and youth level for Real Madrid, and it appears as though the Spanish giants have got a special talent on their hands who will hope to become a more prominent figure as the years go on. 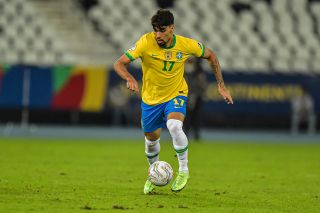 Brazilians spotlight the performance of Lucas Paqueta and Vinícius Junior in the draw against Ecuador Jun 28 2021, 1:53
Olympique Lyonnais

Jurgen Klopp wants to bring Real Madrid star to Liverpool after being impressed over the two legs Apr 15 2021, 6:41
Liverpool FC

Real Madrid list two players for sale for combined €110M, both have been linked with Liverpool Mar 2 2021, 19:07
Liverpool FC