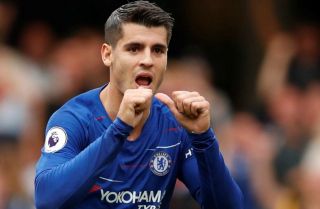 Speculation this week has linked Alvaro Morata with an exit from Chelsea to join Barcelona, and Jordi Alba has seemingly welcomed the idea.

As noted by the Daily Mail, the Spanish forward has been linked with a move to join the Catalan giants in January as his struggles continue at Stamford Bridge.

The 26-year-old managed to score just 15 goals in 48 appearances for the Blues in his debut season with the club last year, while he has seven goals in 21 outings so far this season.

In turn, he hasn’t established himself as the goalscorer Chelsea hoped he would be for them, with the likes of Olivier Giroud and Eden Hazard instead being used up top as alternatives.

Given he made such a positive start to life in England, it will be a major frustration for all concerned that he hasn’t been able to kick on, and it would appear as though he could now be let go with Maurizio Sarri perhaps ready to consider selling in order to bring in his own striker.

With those rumours of a move to Barcelona in mind, Alba was asked about Morata at an event on Thursday and he was seemingly open to the idea of his compatriot joining him at the Nou Camp.

“Good players and good people always fit in at this club. I have a huge appreciation for him,” he is quoted as saying by Mundo Deportivo.

Time will tell if a move materialises, as it would seem slightly bizarre given his history with Real Madrid.

Nevertheless, with Luis Suarez turning 32 in January, Barcelona are perhaps aware that they need a long-term replacement up front, and Morata arguably ticks some of the right boxes in terms of his overall quality to fit into the style of play that the Catalan giants adopt.

While his goalscoring record is poor, his attributes could arguably suit the likes of Lionel Messi and Ousmane Dembele to allow them and others to flourish.