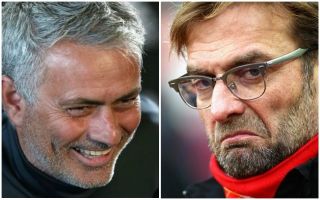 Man Utd travel to Anfield to face Liverpool on Sunday, and Jose Mourinho has seemingly taken a dig at Jurgen Klopp by insisting that ‘trophies matter’.

While the Red Devils toil and continue to chase the top four in the Premier League table, their long-time rivals currently sit top of the pile and look set to mount a serious title bid this season.

However, Mourinho has seemingly ramped up the mind games ahead of the crunch encounter this weekend, as his comments on Friday could be interpreted as a way of trying to build the pressure on Liverpool in their pursuit of a long-awaited league title this year.

“I think sometimes to say just to say is not very intelligent. But when you have the potential you have nothing to hide, because to say we want to win everyone can say that.

“I don’t read much but I think Jurgen told already that their objective is to win the Premier League.”

Time will tell if Klopp does indeed deliver a major trophy to the Merseyside giants this season, but the signs thus far are very promising.

From boasting the best defence in the league to a potent attack which hasn’t even quite found its best form yet, the Reds look well placed to push reigning champions Manchester City all the way this year.

Nevertheless, Mourinho and United will look to deal a big blow to their hopes this weekend, while also simultaneously giving their hopes of a top-four finish a boost with what would be a huge win, especially for the fans given the history behind the fixture.