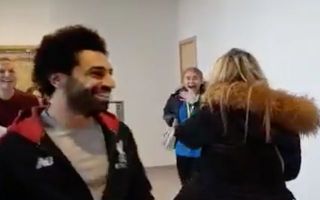 Liverpool ace Mohamed Salah took a trip to Alder Hey Children’s Hospital on Thursday, and clearly these two nurses were thrilled to see him.

Fresh from his heroics in guiding Liverpool to the knockout stage of the Champions League, the 26-year-old was busy showing his class off the pitch too this week as he visited the hospital.

However, it looks as though these two staff members were happier than the children as they spotted the Egyptian international walking past them and produced an hilarious reaction.

To be fair, that is how most fans would probably react if Salah or their football hero walked past, and so the authenticity and genuineness of their reaction is what makes it so priceless.

Although he didn’t stop and chat, Salah looked equally as thrilled and happy about how they reacted to him, while various other staff members can be heard chuckling away in the background.

It just goes to show the impact that Salah has made on Merseyside following his arrival last year, as he has wasted no time in establishing himself as a fans favourite.