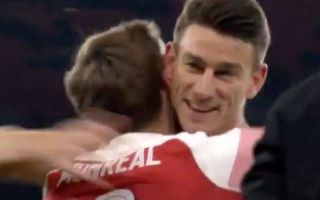 Having recovered from his injury nightmare, Arsenal stalwart Laurent Koscielny looked thrilled to be back in action with the senior side.

The 33-year-old made his comeback in the win over Qarabag in the Europa League on Thursday night, after going through a gruelling recovery from an Achilles injury which he suffered in the same competition last season.

SEE MORE: ‘Crying out for someone like him’ – Arsenal praised for finally addressing decade-long issue by ex-Gunners ace

That in turn forced him to miss the end of the campaign and the World Cup, as well as the start of this season, but he could be set to make a timely return for Unai Emery given the injury problems he’s struggling with after both Rob Holding and Shkodran Mustafi picked up issues in recent weeks.

However, as seen in the video below, Koscielny looked absolutely delighted to be merely back on the pitch with his teammates, as he left the field with a huge smile on his face as he was replaced by Nacho Monreal in the 72nd minute.

He also posted an image himself on Twitter showing just how happy he was, and he’ll hope that he can now continue to get his match fitness back and avoid any setbacks in the recovery process.

Although competition is fierce and he isn’t getting any younger, there is an argument that the Frenchman could still play a key role at Arsenal, and he’ll be looking to prove that in the coming weeks.

For now though, it’s so clear just how much it meant to him to be doing what he loves…

Koscielny departs the pitch with a massive smile on his face. Good to see him back ?? #AFC pic.twitter.com/HQKMPYocsi