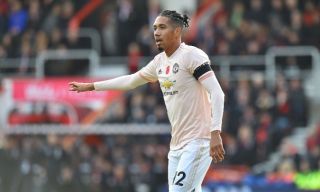 Man Utd have officially confirmed that Chris Smalling has signed a new contract with the club, with reports suggesting that it will keep him at Old Trafford until 2022.

The 29-year-old joined the Red Devils from Fulham in 2010, and has since gone on to make 307 appearances for the club.

Smalling made 46 appearances in all competitions last season as he established himself as a key figure in the line-up under the Portuguese tactician, while he already has 18 outings to his name this year.

Despite United’s defensive vulnerabilities, as evidenced by the fact that they’ve conceded 26 goals in 16 league games, the England international has seemingly done enough to secure the new contract.

Further, speculation had suggested that Mourinho was eager to bolster his defensive options this past summer, as noted by the Independent, but now it appears as though Smalling will continue to play a key role in United’s bid to reach their objectives this season and beyond.

As noted in his own tweet below, it’s suggested that the deal will run until 2022, while there is an option to also extend it for another year, if Smalling does enough to warrant it.

For now though, as per his tweet, he is delighted to have extended his stay at Old Trafford.

We are delighted to announce @ChrisSmalling has signed a new #MUFC contract.

#Breaking Manchester United defender Chris Smalling has signed a new contract until June 2022 with the option to extend for a further year #MUFC pic.twitter.com/ZaSJp0WYj4

I am delighted to continue my journey with @ManUtd. It’s an honour to play for this club & I wanted to take the opp to thank all staff associated with it over the last 9 seasons, my team mates past & present, & the fans who continue to show support for the squad game in game out. pic.twitter.com/VkuU2xhpIg