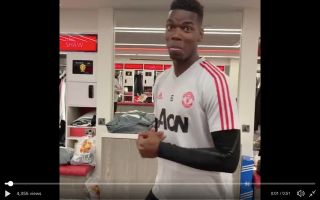 Some Manchester United fans have reacted angrily to a video posted by Paul Pogba where the Frenchman wishes Jesse Lingard a happy birthday before showing off his best dance moves.

Jose Mourinho and the Red Devils travel to Anfield tomorrow afternoon to face off against bitter rivals Liverpool in a crucial encounter.

United’s poor start to the season could be forgotten if Mourinho is the mastermind behind a shock victory against United’s arch enemies tomorrow.

Check out the video below, posted on Pogba’s instagram:

United are currently in 6th place in the league – 16 points behind league leaders Liverpool.

A win tomorrow could motivate the Red Devils to turn around a poor start to the season and finish in the Champions League places after all.

Check out some fan reaction to Pogba and Lingard dancing just a day before United vs Liverpool:

This is why we’re fucking SHITE man. Too busy fucking around at training doing stupid dances. Fuck off. Not in the mood for this

Need this chemistry on the pitch

89 million pounds for that

The state of that!

Such a joke of a club these days

Embarrassment!! Need to get somebody in to sort that shite!!

This current United squads a fucking joke. What’s with all the stupid dancing. Get a fucking grip!