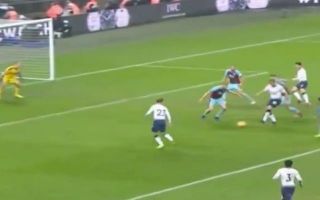 Tottenham left it late but they secured all three points against Burnley on Saturday as Christian Eriksen struck in injury time to seal the win.

Spurs toiled at Wembley on Saturday afternoon, and it appeared as though they were set to drop crucial points which could give Chelsea and Arsenal a boost in the battle for a top-four finish this season.

However, they eventually managed to find a breakthrough, with Eriksen latching onto a pass from Harry Kane to smash home the ball and seal the win, as seen in the video below.

That was the 26-year-old’s third goal of the season to go along with eight assists in 20 appearances, as he continues to play a pivotal role in Mauricio Pochettino’s side.

Nevertheless, he did so off the bench this weekend as he entered the game just after the hour mark, and he most certainly made an impact.

The win moves Tottenham five points clear of both Chelsea and Arsenal, with the two sides set to play on Sunday as they face Brighton and Southampton respectively with the pressure now on their shoulders to cut that gap back down.

Can someone explain to me why Christian Eriksen is a substitute so often? By far Spurs’ most important player, one of the best in the Premier League and still just 26 years of age. Greatest discovery of John Steen Olsen. pic.twitter.com/kiYPpewt0Q