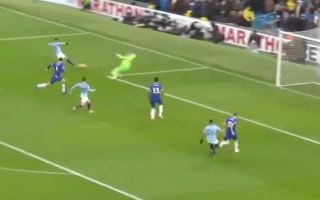 Man City were looking to go back top of the Premier League table on Saturday, and they made an ideal start against Everton courtesy of Gabriel Jesus.

After their defeat to Chelsea last time out, Pep Guardiola would have been looking for a positive reaction and performance from his players to bounce back immediately.

Having started the day a point adrift of leaders Liverpool, a win would have been the perfect way to pile the pressure on their Premier League title rivals ahead of their clash with rivals Manchester United on Sunday at Anfield.

With that in mind, City made the ideal start as after a poor clearance from the visitors, the reigning champions showed how clinical and brilliant they can be in the final third with a simple yet effective move.

As seen in the video below, it took just two key passes to put Jesus in behind, and the Brazilian did the rest with an excellent finish past Jordan Pickford.

It’s noted in the tweet below that the 21-year-old has gone 11 games without a goal, and so he would undoubtedly have been relieved to finally get on the scoresheet.

His 11 game drought is over. pic.twitter.com/QsnPePPi1k

Mark Halsey column: Goals like Roberto Firmino’s vs Aston Villa should be given… offside VAR protocol needs to change