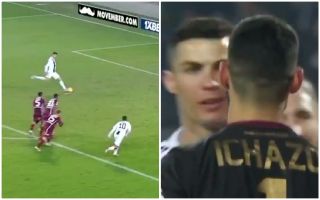 Cristiano Ronaldo wasn’t to be denied on his first appearance in the Derby della Mole, as he scored for Juventus against rivals Torino on Saturday night.

The 33-year-old stepped up from the penalty spot in the second half, and as seen in the video below, he managed to squeeze his effort past Salvador Ichazo to break the deadlock.

It was a landmark goal for the Bianconeri as it was their 5000th goal in Serie A, and so it was fitting that their new talisman was the one to bring it up as he continues his fine debut campaign with the Turin giants.

However, the Portuguese superstar managed to get himself booked immediately after as he decided to bump into Ichazo as he made his way to the touchline to celebrate with his teammates.

It didn’t seem to bother him too much as he looked delighted to get on the scoresheet and make his mark on this fixture at the first time of asking, but it was a little unnecessary to get involved with Ichazo after the goal as the Torino goalkeeper would have been frustrated enough not to have kept his spot-kick out having got a hand to it.

CR7 has scored the 5000th goal in Serie A for Juventus ? pic.twitter.com/K4WnkovCZu

5000 – Cristiano Ronaldo has scored Juventus’ 5000th Serie A goal, the bianconeri are the first team to reach this milestone. Check ?.#TorinoJuve pic.twitter.com/ZyzMFQVZTw