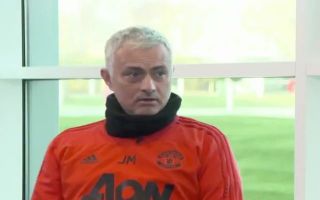 Ahead of Man Utd’s trip to Anfield to face Liverpool on Sunday, Jose Mourinho was asked if this is the best Reds side he has ever faced.

Jurgen Klopp’s men are arguably in with the best chance of winning major honours that the club has had in years having built a solid squad with a refined style of play.

That is reflected in the fact that they began the weekend top of the Premier League table after 16 games, while they’re looking to build on their run to the Champions League final last season.

However, although the tweet below is a wonderful soundbite given Mourinho essentially reminds SoccerAM reporter Tubes that the current Liverpool side hasn’t won anything yet compared to the Champions League-winning side he has faced in the past, the full version below shows the Portuguese tactician offer reasoning for his answer.

In truth, although there is a cheeky little dig at Liverpool thrown in and Mourinho knows what he’s saying, he’s made a valid and honest point when asked the question, and so it’s up to Klopp and his players to prove that ultimately this is the toughest Reds side that the United boss will face when his career is said and done.

Nevertheless, the Red Devils will be out to dent their title hopes by picking up a positive result at Anfield after Manchester City moved back top of the pile on Saturday with their win over Everton.

“This one has won nothing”

Jose Mourinho on whether this Liverpool squad is the toughest he’s faced in the Premier League ? pic.twitter.com/OWuRysjeGY