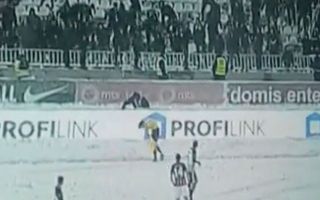 Heavy snowfall seemingly put Partizan Belgrade’s clash with Macva Sabac in jeopardy this weekend, but unfortunately for this linesman, the game went ahead.

As seen in the video below, the pitch was covered in snow which surely made playing conditions bitterly difficult, with the game eventually ending in a goalless draw.

However, as well as settling on the pitch, the snow filled the stands too and fans made the most of it by using it as ammunition to hurl at the linesman after he awarded a throw-in.

This looks like an absolute nightmare for the assistant, and so we just hope that he packed his thermals to keep warm amid the barrage and poor form from the Partizan fans…

There is no way this game should be going ahead. WELCOME TO SERBIA! pic.twitter.com/lIUqgjFnnS