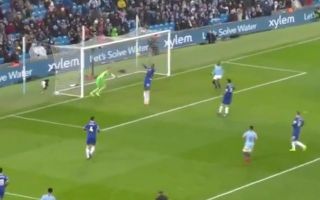 After coming off the bench in the second half, Raheem Sterling wasted little time in restoring Man City’s two-goal cushion over Everton at the Etihad on Saturday.

Gabriel Jesus had bagged a double to put the hosts in a strong position to secure victory, but Everton forward Dominic Calvert-Lewin reduced Everton’s deficit to set up a potentially nervy finish to the game.

However, Sterling had other plans as he took just over two minutes on the pitch before making his mark on the encounter, nodding home after some patient build-up play from City.

In truth, there was plenty of poor defending from Everton involved too as it was all too easy for the reigning Premier League champions to break down the left flank and pick out Sterling with the cross.

Nevertheless, they showed just how clinical they can be if given time and space to punish teams, and that’s exactly what they did, as seen in the video below, to end any short-lived Everton hopes of mounting a comeback.

Raheem Sterling heads it in just two minutes after coming on ?

Video: Peter Crouch has fellow pundits in stitches as he forgets all about his Champions League record