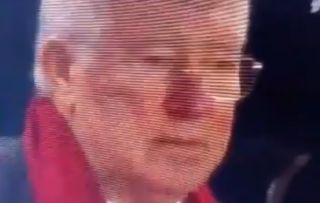 Sir Alex Ferguson did not look like a happy man as he sat and watched another abject Manchester United display as they lost 3-1 to rivals Liverpool.

Just look at Fergie’s face in the video below as he brings that classic frown and slow shake of the head that would have sent shivers down the spines of his players back in his pomp.

MORE: Video: Manchester United flop hits a shot so bad it knocks a steward off his seat

The Scot remains perhaps the greatest manager in the history of English football, and cannot be happy with what’s happened with his old clubs since he retired in 2013.

United fans won’t be happy either, with their team looking increasingly out of the running for a top four spot, while today’s result sent their rivals back to the top of the Premier League.

Shake of the head from Sir Alex. Says it all. [@ManUtdBR] pic.twitter.com/z8nQUL9lE1