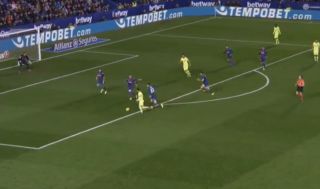 Lionel Messi is having one of those nights where he just looks head and shoulders above pretty much everyone else he’s sharing a pitch with.

Watch the videos below as first he races past three Levante defenders before producing a pass for Barcelona team-mate Luis Suarez that suggests he has eyes in the back of his head.

As if that brilliant assist wasn’t enough, Messi got in on the act himself just eight minutes later, racing on to a fine through-ball from Sergio Busquets and finishing with minimal fuss.

The Argentine may only be the fifth best player in the world according to the recent Ballon d’Or rankings, but nights like this remind us of the sheer levels of utter brilliance we’ve all come to take for granted.