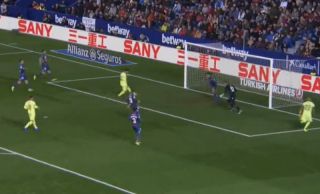 Lionel Messi is having the time of his life for Barcelona against Levante tonight, with the Argentine netting a hat-trick.

Having set up Luis Suarez’s opener brilliantly, Messi then added one himself just shortly before half time.

In the second period, the 31-year-old has continued to destroy his opponents, netting two more, both from fine team moves by Ernesto Valverde’s men.

You can see the two Messi goals below, with the fourth goal featuring a delightful pass from Suarez before Arturo Vidal eventually sets Messi up for the tap-in…