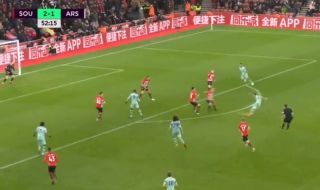 Arsenal manager Unai Emery continues to show his magic with half-time substitutions as Alexandre Lacazette set up Henrikh Mkhitaryan to make it 2-2 against Southampton.

This brought the Gunners level after a poor first half saw them go in a goal down at the break, but Lacazette came on and made a near-immediate impact.

The Frenchman robbed the ball of Southampton midfielder Oriol Romeu before his pass found Mkhitaryan, who did the rest.

Of course, the Armenian got a lot of luck with a big deflection helping his shot in, but you have to say the extra man up front has had an impact.

Well played again by Emery – can he now inspire a win?