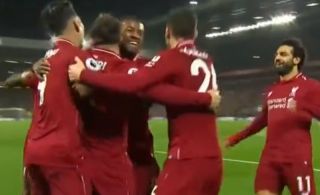 Xherdan Shaqiri scored not long after being brought on from the bench by Jurgen Klopp to make it Liverpool 2-1 Manchester United.

The Reds had been pegged back by a Jesse Lingard goal from an Alisson error in the first half, but they are now back in control of the contest at the time of writing.

Liverpool fans will desperately hope their team don’t lose the lead again as this strike could well prove huge in terms of this season’s title race.

With Manchester City beating Everton yesterday, a win for Klopp’s men today would be needed to put them back on top of the Premier League table.