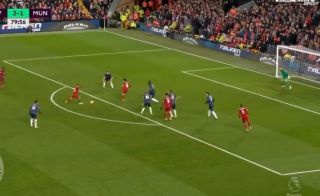 Xherdan Shaqiri has his second of the game as Liverpool go 3-1 up against Manchester United and look to be heading for three points at Anfield.

The Switzerland international has certainly sent a message to Jurgen Klopp with a brace since he came off the bench with the score at 1-1 this afternoon.

Liverpool will be thrilled to see Shaqiri making such an impact, with his double surely now sending LFC back to the top of the Premier League?

Here’s a clip of the Shaqiri goal against Manchester United, as his deflected effort made its way past David de Gea…