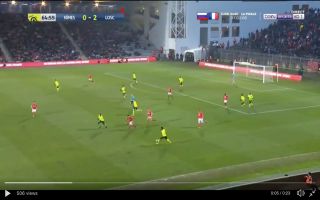 Arsenal and Unai Emery were stunned this afternoon Ralph Hasenhuttl guided Southampton to a shock victory in his first home game in charge of the Saints.

Arsenal were defeated 3-2 by relegation candidates Southampton, the Gunners could literally only hold their heads in their hands when the full time whistle blew. All three of the Saints’ goal came through headers.

Charlie Austin came off the bench to score the winner at St Mary’s in the 85th minute of the tie.

Meanwhile in France, one of Arsenal’s top targets according to The Sun – Nicolas Pepe – scored for Lille just as the Gunners fell to a shock defeat.

Pepe launched a Lille counter attack from deep into his own half, the Ivorian charged forward with the ball before directing a lovely finish into the back of the net in the 65th minute of Lille’s Ligue 1 clash against Nimes.

Check out a video of Pepe’s goal below:

Pepe is certainly one of the standout stars across Europe this season:

3 – Top goalscorers in the top 5 leagues this season :

Pepe would be a fantastic signing for the Gunners.