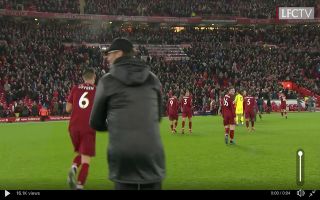 The win clearly means just as much to Klopp as it does to the Liverpool faithful, the German has now beaten all 26 teams that he has faced in the Premier League at least once.

Klopp has been waiting for the moment where he would overcome the Red Devils for some time now.

Check out Klopp’s celebration below:

Liverpool are now 19 points ahead of Manchester United, Jurgen Klopp’s men are sitting at the top of the league – 1 point above reigning champions Manchester City.