Arsenal are the favourites to sign Lille attacker Nicolas Pepe in January, but they may face still face stiff competition for his signature.

Gunners boss Unai Emery could be looking to bring in fresh reinforcements during the winter transfer window, as the club chases a place in the Premier League’s top four.

A 3-2 defeat at the hands of Southampton on Sunday has left Arsenal three behind fourth-placed Chelsea after 17 matches of the 2018-19 campaign and a further two behind arch-rivals Tottenham in third.

According to L’Equipe via France-based football journalist Matt Spiro on Twitter, one man the club has identified as a major target to boost their bid for a Champions League spot is Pepe, who has been arguably the best player in Ligue 1 over the last few months. 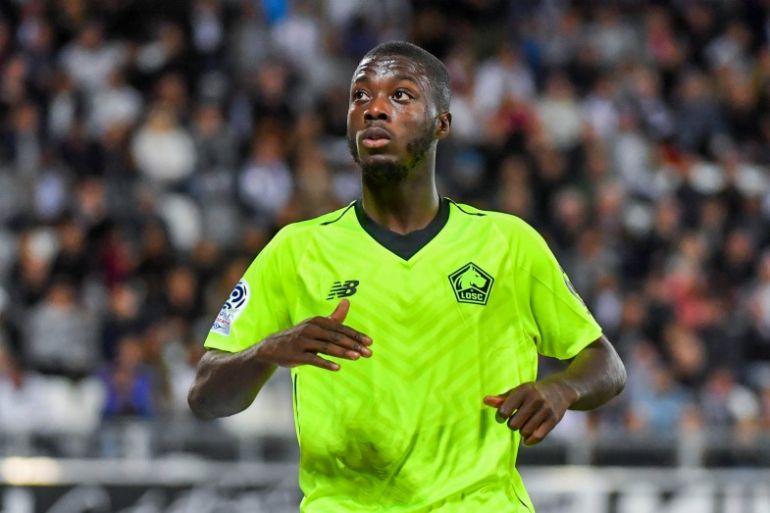 Lille are flying high at the top of the table, second only to runaway leaders Paris Saint Germain and Pepe has helped himself to 12 goals already, making him the joint top scorer in the league alongside Kylian Mbappe and Emiliano Sala.

L’Equipe reports that several major clubs are interested in signing the in-form 23-year-old and Lille may be prepared to listen to bids in the region of €50 million for his services, but the club’s owner remains reluctant to lose him mid-way through the season.

The French publication also states that Arsenal are the frontrunners in this particular transfer race, which will come as great news to supporters, who will surely already be looking forward to seeing another French winger plying his trade at the Emirates Stadium.

The Gunners have a rich history of success when it comes to bringing in foreign imports from France, from Thierry Henry to their latest hitman Alexandre Lacazette – and Pepe certainly has the talent to add to that legacy.

That being said, this particular deal is still a long way off at this point and a lot could depend on whether or not Emery decides to focus more on signing Defensive cover as a priority over an attacker, given the season-ending injury sustained by Rob Holding recently.