Speculation in Italy has suggested that Juventus are increasingly likely to launch a bid to re-sign Paul Pogba from Man Utd in January.

The 25-year-old once again found himself on the bench for the clash with Liverpool this past weekend, with Jose Mourinho now snubbing him on four occasions in recent weeks against Young Boys, Arsenal, Fulham and now their Merseyside giants.

That is not a particularly positive outlook on Pogba’s future at Old Trafford in that the Portuguese tactician is consistently preferring other options and leaving arguably his most talented player out of some of the biggest fixtures of the campaign.

Rumours over Pogba’s future have seemingly been rife ever since he conceded that he wasn’t entirely happy back in August, as noted by the Guardian, but with question marks being raised over his form on the pitch too, it has led to the decision to leave him out of the line-up.

As seen at Anfield though, there is clearly a lack of quality in the United midfield without him, and while he must also take responsibility for his disappointing form, it has to be questioned as to whether or not the Red Devils can actually afford to leave him out if they want to salvage something from this season.

It remains to be seen how that plays out, but as noted by Calciomercato and seen in the image below taken from the front page of Tuttosport on Monday, the Turin-based newspaper has claimed that Juve are ready to make their move in January and United could be open to an exit.

That seems like a questionable decision in truth as it’s difficult to see how they are going to sensibly and efficiently replace Pogba half-way through a season if he does leave, or perhaps the plan is to go on without him in the second half of the campaign and fill the void next summer.

United are currently 11 points adrift of the top four. Mourinho can ill-afford any more slip ups, with or without Pogba in his starting XI, and based on recent form and troubles, he could perhaps do with the World Cup winner at his disposal even if he can’t manage to produce week in and week out. 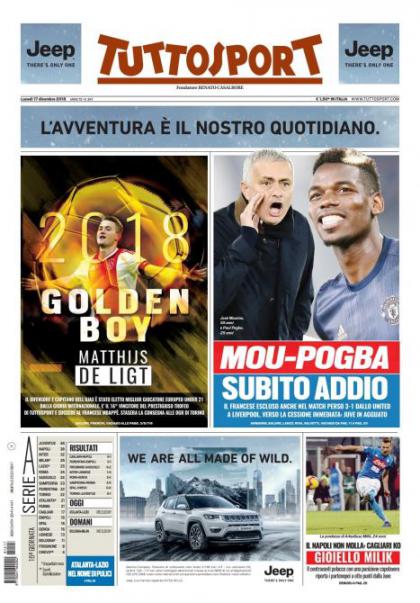