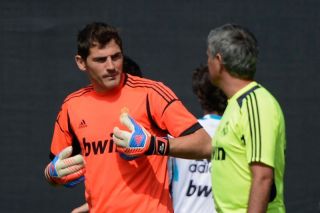 After a tense relationship during their time at Real Madrid, Iker Casillas has seemingly reignited his feud with Jose Mourinho after Man Utd’s loss at Liverpool.

As noted by the Independent, the issues between the pair have rumbled on even after leaving the Bernabeu, as they’ve swapped barbs through the media.

Casillas has now decided to have a fresh dig at his former coach, as seen in his tweet below, following his side’s defeat at Anfield to rivals Liverpool.

It was another miserable afternoon for the Portuguese tactician, as Man Utd have now slipped 11 points adrift of the top four as they risk missing out on Champions League football next season.

Casillas seemingly couldn’t resist having a pop, questioning when it will become apparent that perhaps Mourinho’s time at Old Trafford has come to an end.

“According to a Portuguese newspaper, someone said that a player like me [37 years old] is at the end of their career. I completely agree!” Casillas wrote on Twitter.

“My question, for this newspaper, is: in the case of coaches, when and at what moment do you see they are no longer leading or training a team?”

It remains to be seen if Mourinho’s job is in danger, as ultimately results haven’t been good enough this season and there hasn’t been a consistent response to suggest that he can turn things around in the long-term.

As they continue to battle for a top-four finish perhaps a positive festive period will save him, but Casillas is seemingly keen to ask questions as it appears as though their feud is alive and well still. Although he hasn’t specifically mentioned Mourinho by name, Goal.com are one of countless outlets to note that it’s arguably more than a mere coincidence that he posted the tweet on Sunday night.