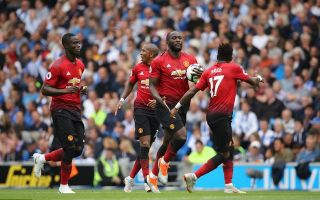 Manchester United striker Romelu Lukaku reportedly wants out of Old Trafford and is eager to orchestrate a transfer to Real Madrid.

The Spanish giants are notably light up front at the moment after losing Cristiano Ronaldo in the summer, with players like Karim Benzema and Gareth Bale failing to fill the void.

And while one has to question if Lukaku could really be the man to do that given his own slump in form this season, Don Balon claim the Belgium international is keen to take advantage of this situation at the Bernabeu.

Previously one of the best forwards in Europe during his time at Everton and even at United last season, Lukaku could perhaps revive his career with the right move.

It’s easy to imagine the 25-year-old could do a lot better in a more attack-minded side than this Red Devils outfit, where many players have gone backwards under Jose Mourinho.

Paul Pogba, Alexis Sanchez and other quality performers have looked shadows of their former selves in recent times, so Lukaku is far from the only one suffering.

It remains to be seen how Madrid will solve their striker issue, but Don Balon suggest several names could be in the frame and Lukaku is one of those to offer himself to Los Blancos.