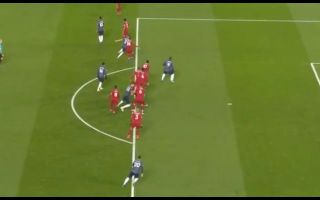 Liverpool secured a 3-1 win over Man Utd on Sunday, but the visitors having a disallowed goal after just four minutes was a key early incident at Anfield.

As seen in the video below, Ashley Young swung in a free-kick from the left flank in the opening stages of the encounter, and although he didn’t get a touch on it, Romelu Lukaku was adjudged to have interfered with play and the goal was ruled out.

However, on closer inspection, it appears as though Mane has adopted a cheeky, and rather risky, tactic to catch the Belgian international in an offside position.

As seen below, he’s caught giving his rival a good shove to push him in behind the Liverpool backline as he perhaps didn’t fancy the physical battle from the set piece, and his plan worked perfectly.

Lukaku made a hash of his attempted finish as he swiped at thin air, but after the ball nestled into the back of the net and Young thought he had given United the lead, the linesman’s flag quickly went up and the United striker’s involvement was enough to end their short-lived joy.

It was an uphill struggle for the Red Devils from that point onwards, as a mistake from Alisson was the only way in which they were able to make a serious dent in the game and get back on level terms through Jesse Lingard.

While it worked on this occasion, Mane shoving players off the ball from free-kicks is perhaps not the most sensible strategy to use consistently moving forward as it could eventually cost him and his team. However, it is very clever in his defence…

look at Mane push Lukaku into an offside position just as the ball is played, absolute genius lad. video for educational purposes only pic.twitter.com/fHsMmejbpt

God, take away enemies from my life like Mane did to Lukaku. pic.twitter.com/PKJOlrAHaM