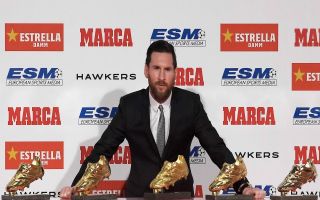 Barcelona captain Lionel Messi won the Golden Shoe for a record-breaking fifth time on Tuesday, after finishing as the top scorer in Europe last season.

The 31-year-old magician hit 34 La Liga goals last term as Barca secured the title, which was two more than Mohamed Salah of Liverpool, who managed 32 in the Premier League.

According to Sky Sports, Messi was awarded the 2018 Golden Shoe for the fifth time, which means he now holds the record outright with 5 wins ahead of Juventus striker Cristiano Ronaldo.

For many, the Argentine is not only the best player still active today, but also the greatest footballer to have ever played the game, having set a new standard in terms of goalscoring and general performance over the last decade.

Extraordinarily, Messi is again leading the race for the 2019 Golden Shoe, having already hit 14 goals in 14 La Liga appearances at the start of the 2018-19 campaign. 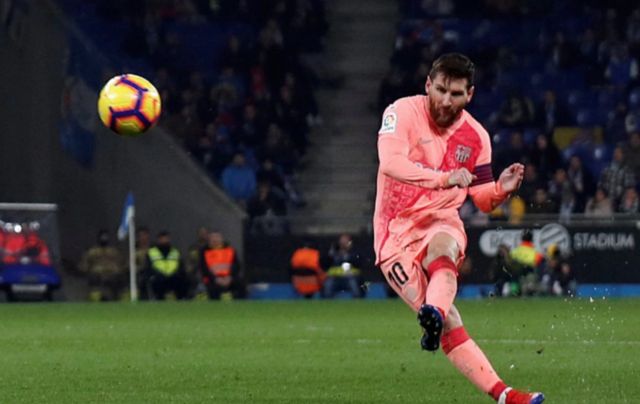 As Sky Sports reports, the Barcelona superstar expressed his delight after receiving the coveted award: “I love football, but when I started I didn’t expect all this. My dream was to be a professional player.

“This is thanks to the hard work and effort I have put in, and above all to my teammates. I have the best players in the world at their positions playing beside me.”

Messi has shown no sign of slowing down as he enters the latter years of his outstanding career and has his sights set on securing a fifth Champions League title with Barca come May.

The diminutive playmaker has already scored six in four European appearances this term and while he is in this kind of form, the Spanish champions will be difficult to stop in any competition over the next six months.

Messi was inexplicably voted as the fifth best player in the world at this year’s Ballon d’Or ceremony earlier in December, but in the eyes of most football fans and experts across the world, he is still very much number one, as his latest accolade only serves to emphasise further.