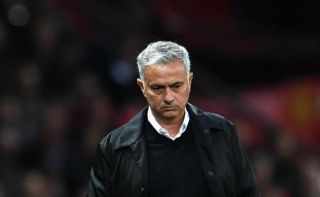 Manchester City supporters have been chanting ‘bring back Mourinho’ during their quarter-final clash against Leicester City on Tuesday night.

The Portuguese coach was sacked as Manchester United manager earlier in the day, after two and half years in the hot seat at Old Trafford, having seen the team slip down into sixth place in the Premier League.

Meanwhile, City are hoping to book their place in the Carabao Cup semi-finals with a win at the King Power Stadium and many of the club’s away fans have taken the opportunity to mock Mourinho’s United departure – according to Sport Bible.

The City supporters have been hilariously chanting ‘bring back Mourinho, bring back Mourinho’ in full voice, suggesting that they wanted his miserable reign at the Theatre of Dreams to continue and United’s ill fortunes on the pitch to persist.

The reigning Premier League champions are 1-0 up against Leicester with twenty minutes to go, closing in on yet another victory as they continue their dominance of English football.

Pep Guardiola’s men are a point behind Liverpool at the top of the league after 17 matches but remain odds-on favourites to retain their crown come May, seemingly only getting stronger as the season progresses.

United meanwhile, have been left in a dire situation by Mourinho, 19 points behind Liverpool and 11 behind fourth-placed Chelsea, with only the Champions League and the FA Cup left to play for in the second half of the season.

Whoever succeeds the 51-year-old will have a tough task on their hands, but the Red Devils still have plenty of talent within their ranks and should start to improve quickly under a more positive, forward-thinking manager.